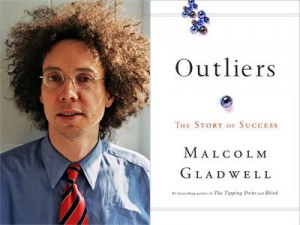 I was fortunate enough to be invited to join John Paul II’s school-based Book Club and, much to my delight, they are reading one of my favorite authors, Malcolm Gladwell.  You may have read Gladwell in the New Yorker , seen him on Strombouloupoulos (shameless plug for a great show), or read “The Tipping Point” or “Blink”.  The book that JPII is looking at though is “Outliers, The Story of Success”.  An absolutely wonderful book which looks at the myth of highly successful people being born with innate intelligence and ambition.  In Gladwell’s research, he suggests that the story of success is far more complex than that – and far more interesting.

Gladwell looks at highly successful people in a variety of fields.  From Gretzky to the Beatles and from Bill Gates to Michael Jordon, there is some real commonalities about their success.  One of the commonalities is the amount of hours they have put into their field in order to become not simply proficient at what they do, but masterful.  10,000 hours – that’s the magic number, 10,000 hours.

Gladwell also looks closely at the importance of birth month is attributing to success – and guess what.  There are huge correlations between success, especially in sport, and the month that stars are born.  Children who enter a sport as a January – March child are somewhat more developed than those say with December birthdays, and therefore get put on better teams, receive better coaching and develop confidence more readily.  This is consistent through all the sports that Gladwell examines.  So, what does that say for schools . . . same thing.  Children who enter school a little more developed have a strong tendency to do better . . . . go figure.

So, what do we do as educators to level the playing field?  How do we ensure that all students have a chance to succeed equally?  We differentiate and do our very best to not tier children in our care.  We take the students from where they are developmentally and work from there.  We build them up and allow them to develop their natural gifts when they are ready for them.  So, just for fun, look at the strongest children in your classes, now look at the birthdays – are you seeing what Gladwell points out?  I’d love to hear from you.